What are you looking for?

Still the Absolute Best Method to Remove Iron and Sulfur

For over 25 years, I have been involved in pioneering the technology of using hydrogen peroxide for the eradication of iron and sulfur and for the record, I still believe it is the best technology for doing that.  There are many people who still use chlorination for this purpose.  Chlorination is simply the process of adding chlorine to water. This method is used to kill certain bacteria and other microbes in tap water as chlorine is highly toxic. In particular, chlorination is used to prevent the spread of waterborne diseases such as cholera, dysentery, and typhoid. However, chlorine is not a good oxidizer, and iron and sulfur need to be oxidized completely to be removed from water.

Some companies are now using oxygen, ozone or air induction systems to oxidize iron and sulfur.  The problem is that most are madly over-applying some sound science using undersized systems incapable of treating even modest quantities of water.  Some of the systems that  are routinely seen on the market today are tantamount to using a smart car to pull a semi trailer fully loaded with steel – they have no chance for continued success!

It’s very simple to use H2O2 to oxidize iron and sulfur and it ALWAYS works – it just depends upon the amount of hydrogen peroxide needed.  Iron and sulfur have to be oxidized to be removed from the water.  Hydrogen Peroxide is one of the most powerful oxidizers known to man — stronger than chlorine, chlorine dioxide, and potassium permanganate.

Despite its power, H2O2 is a natural metabolite of many organisms, which decompose the H2O2 they produce into oxygen and water. H2O2 has none of the problems of gaseous release or chemical residues that are associated with other chemical oxidants. And since H2O2 is totally miscible with water, the issue of safety is one of concentration. Industrial strength H2O2 (such as 50%) is a strong oxidizer and as such requires special handling precautions, but we use 7% which is safe. 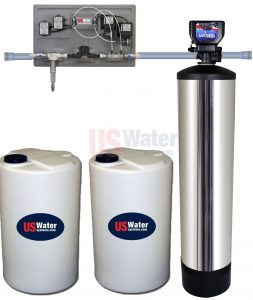 In most cases a system such as the system above is installed.  It consists of a hydrogen peroxide solution tank, a water meter, a chemical injection pump and a catalytic carbon backwashing filter (such as the above left side of the page).  It can sometimes mean installing a duplex tank system and a dual injection panel to eradicate the iron or sulfur (pictured to the right).  In extreme situations, you will have an injection panel with two injection pumps.  One injects H2O2 just ahead of tank #1 and the the other one injects the hydrogen peroxoide ahead of tank #2.  The tanks are in series, not parallel so Tank #1 does a lot of the “heavy oxidation” and tank #2 in the “polisher” tank.

What if it Doesn ‘t Work

If it doesn’t work on your water, you will be the very first. I am talking about water within reason – if you have 300 ppm of iron or sulfur, you should probably run away as fast as you can.  Water can contain many contaminants and some directly compete of affect other contaminants.  Hydrogen sulfide (rotten-egg odor) is pretty straightforward and we have been successful in removing H2S from water with sulfur up to 60 to 70 ppm.  It simply is rooted in sound science and it HAS to work.  We don’t like to go much past 30 ppm for iron, unless not a lot of water is being used.

The most common problem is that sometimes people intentionally (or unintentionally), do not use enough hydrogen peroxide. After all, the only drawback to H2O2 is the annual peroxide cost and some people try and save too much by “starving the system.” It may work fine for a number of months, but once the system becomes “fouled” with iron or sulfur, it must be backwashed multiple times with the peroxide feed set at 100% and in some cases, it does not clear up until several weeks have passed.  I have seen it take up to two months for the carbon bed to become clean and effective.

You can put the system in backwash and unplug the carbon tank controller, allowing the system to backwash for as long as possible at 100% peroxide feed.  If the carbon is less than 2 years old, it can usually be restored to it’s original condition, but if it is very fouled and you don’t want to wait, then you can just replace the catalytic carbon.

A H2O2 system will operate trouble-free for many years, providing the proper amount of hydrogen peroxide is used.  How can you know if you are using enough?  It’s very simple: you should see a few air bubbles in the water.  Too few means your are not using enough H2O2.  Bubbles are good!

Our new Matrixx inFusion H2O2 System represents the culmination of 25 years of H2O2 innovation, and is now the State-Of-The Art in Iron andf Sulfur Eradication Systems.  Just look at some of these innovations: 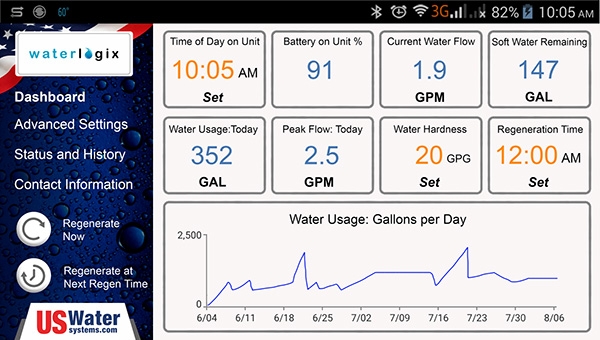